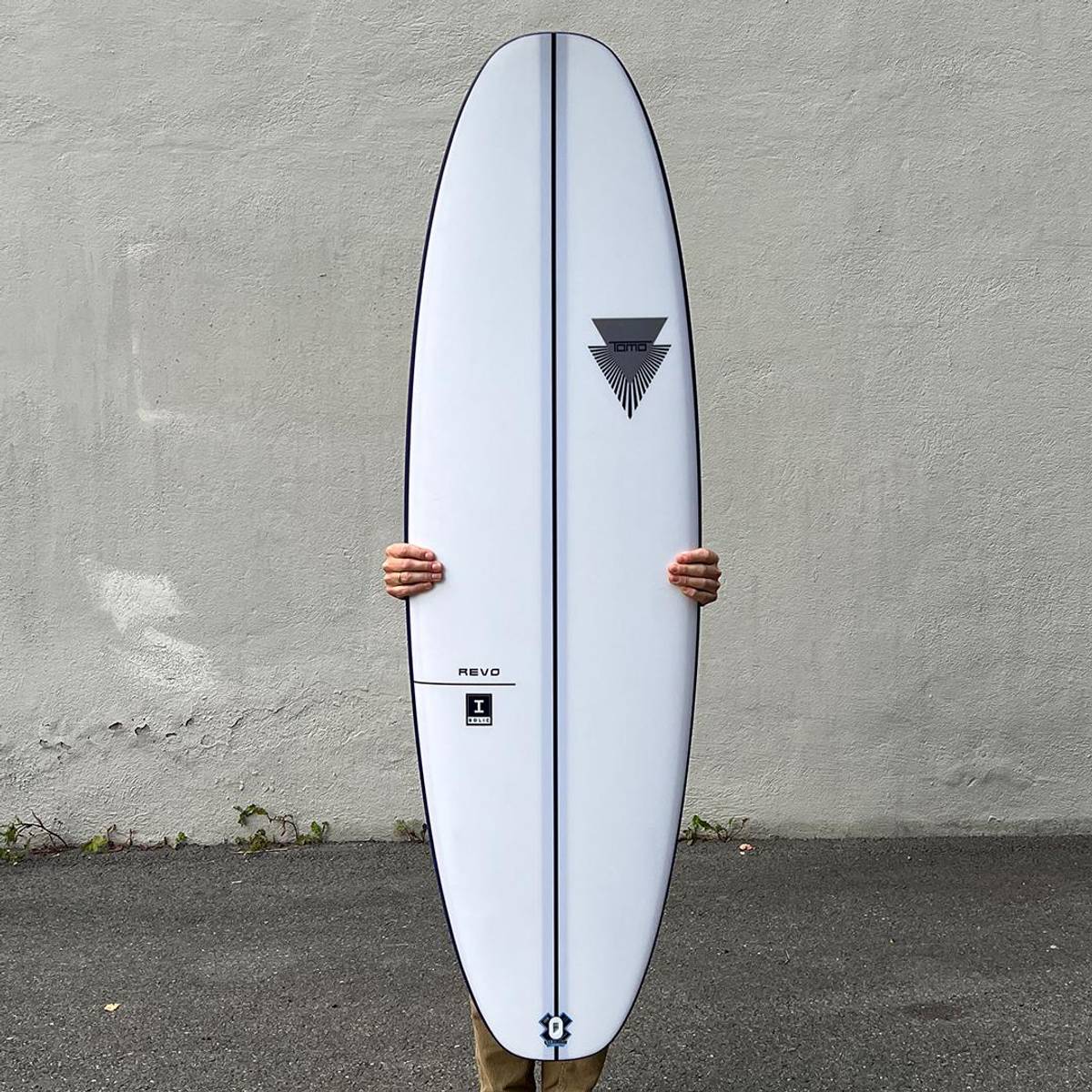 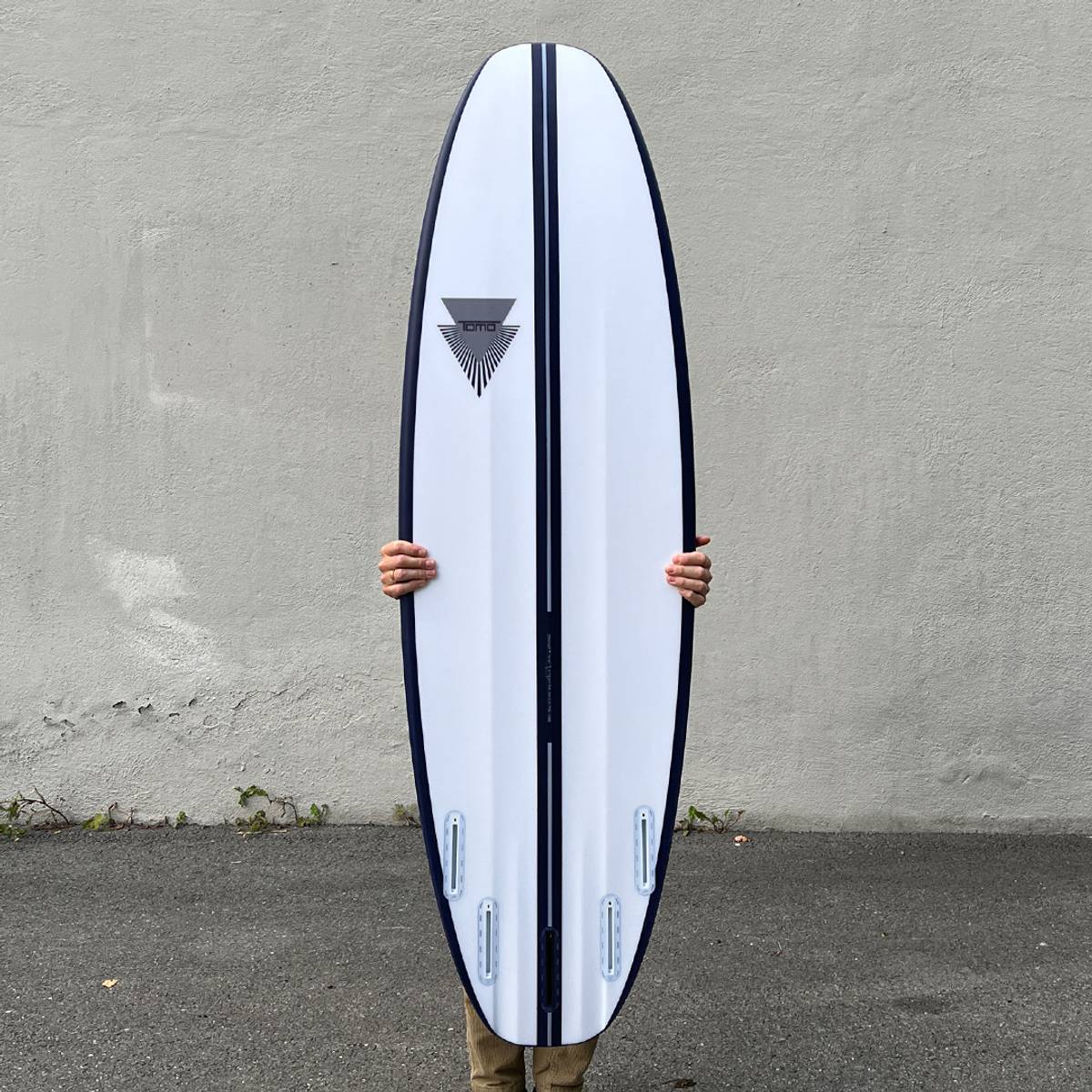 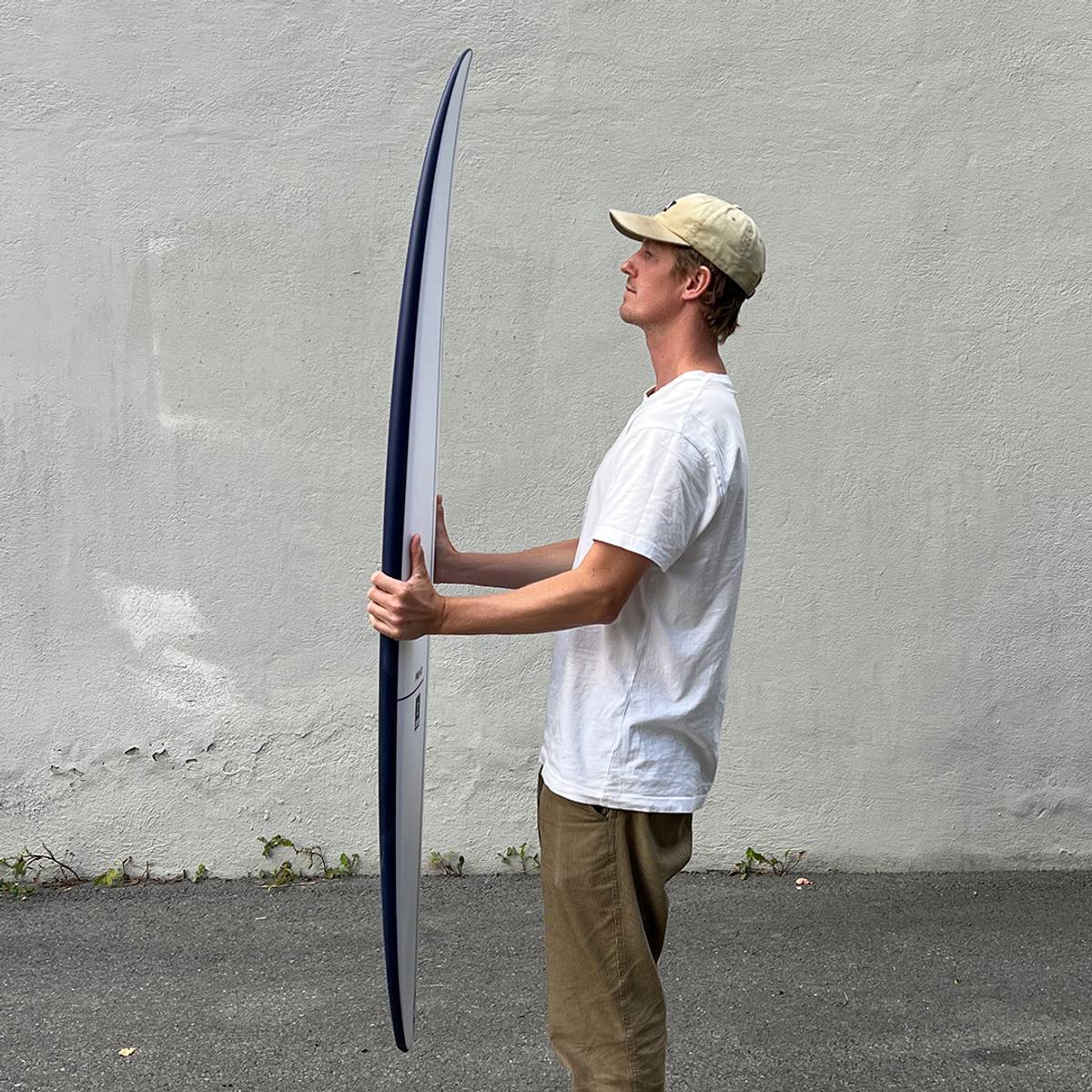 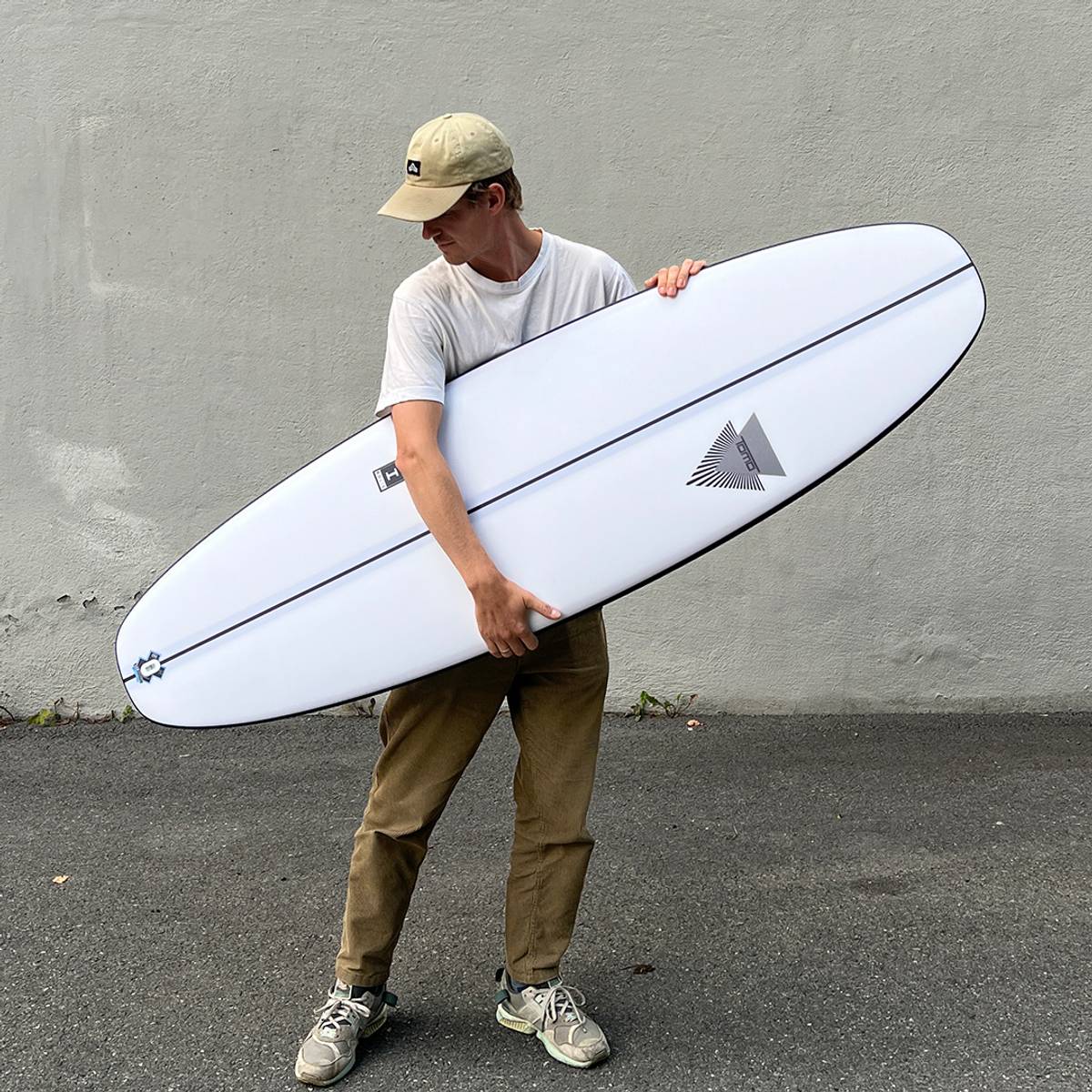 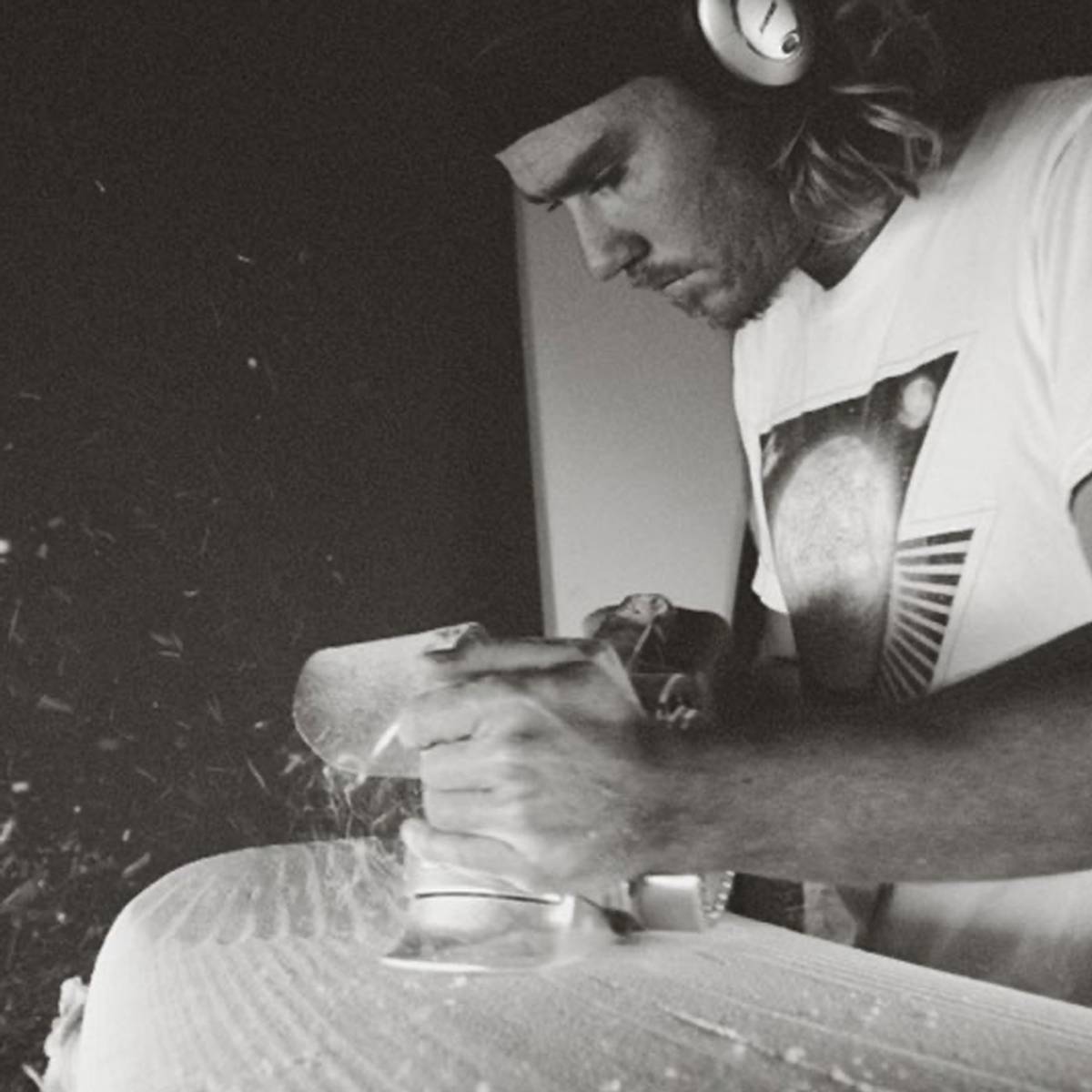 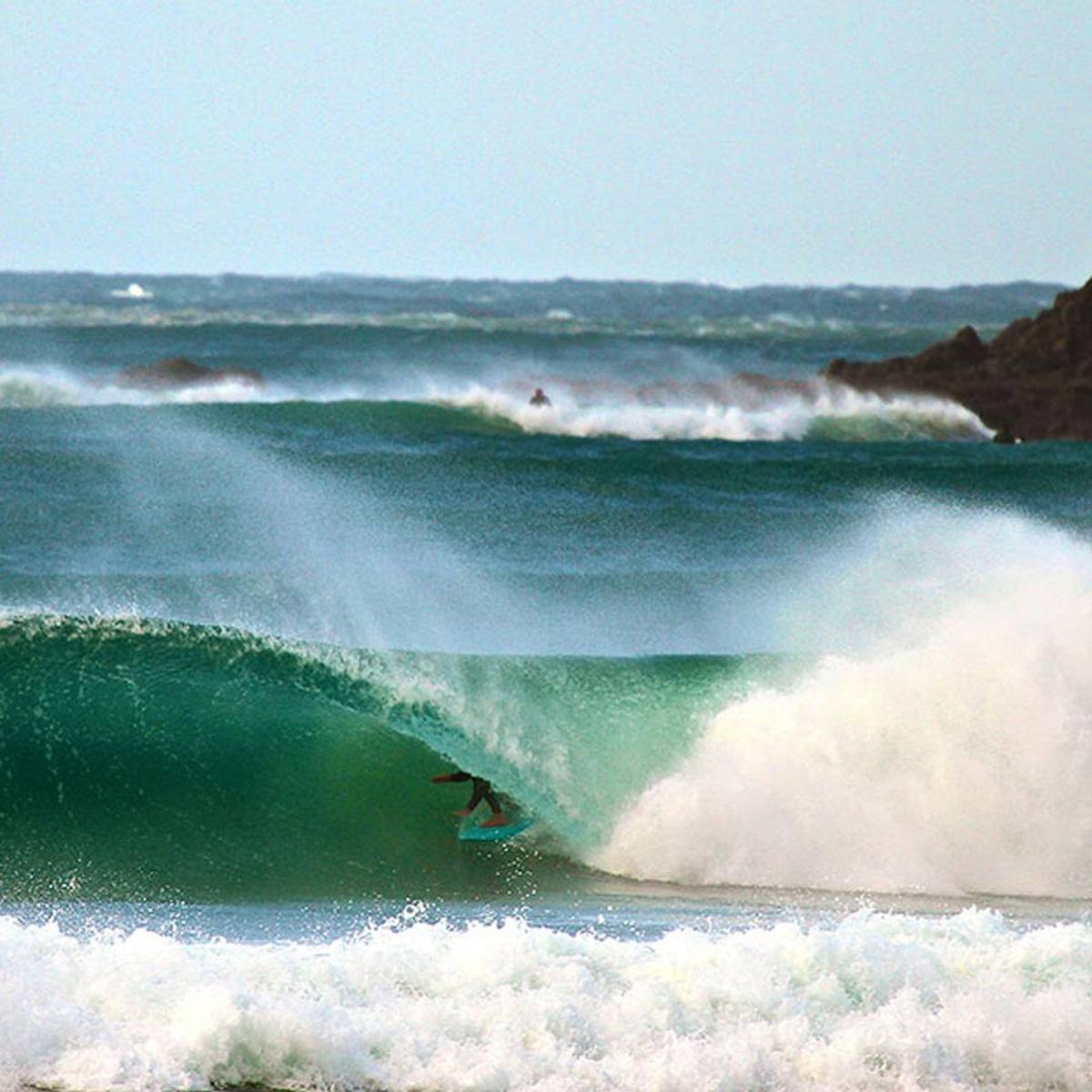 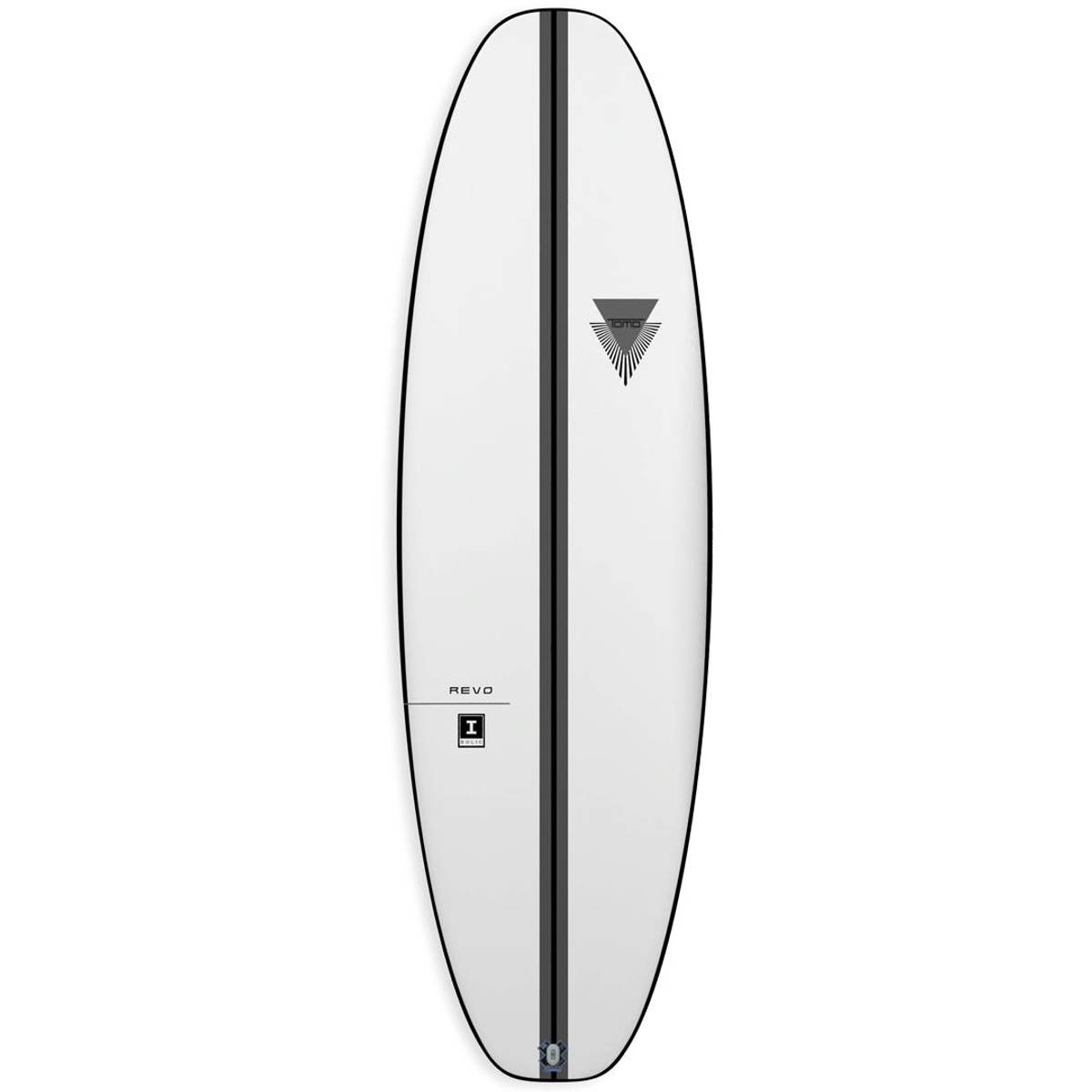 The Revo is the latest update to the now famous Tomo Evo design. Looks like skateboard, rides and reminiscent of a snowboard and has bottom contours you might find in a wake board.

The performance of the Revo is purely functional and represents a unique and obvious future direction for high performance surfing. No summer quiver is complete without this board.

It is an extremely fast design which will blow through flat sections with easy while still maintaining the abilty to surf tight to the pocket.

A great board is one that you can pull out of the quiver and surf well in any conditions.

The REVO is the latest update to the now famous, TOMO EVO. Featuring Vee Quad Concave (VQC)The cutting edge in performance hull design'. Vee Quad Concave (VQC) combines the exceptional maneuverability and rail-to-rail transitions of a vee hull with the lift and response of quad concave to provide the most unique, high performance surfing experience we have ever offered! The higher lift-to-drag coefficient allows for easy wave catching and speedy transitions while maintaining a controlled feel attributed to the balanced 'rectangular' template of the Modern Planing Hul (MPH).

The REVO has a more refined outline curve and a higher rocker to its predecessor, allowing this design to perform more radical lines closer to the pocket of the wave. A fantastic quad fin design as the "deep central spine' of the vee provides plenty of directional control. The design can still be ridden as a thruster, though it is recommended to use a smaller rear fin - or a 2+1 setup.

The Evo is the pinnacle of Daniel Thomson’s Modern Planing Hull designs, shaped into accessible dimensions and fit for surfers from beginner to advanced.

It was this shape in 2014 that began Daniel’s path towards refining his Quad Inside Single Concave - a design principle that has since pollinated across every shape he designs, while the Evo continues to maintain its position as one of the most easy to surf shapes on earth.

This model was first released in LFT in 2014. And there it stayed until this year when we made it available in Timbertek for the first time. We’ve since learned that the Timbertek version is often a favorite among many who prefer quick thrust towards the shoulder and big hacks on rail, while the LFT version has been favored by those with a more up and down approach in the pocket and in the lip.

Today we’re excited to release what we believe is the best version of the Evo yet. This shape is now built in Helium - so light it shocks you and so responsive it talks to you. And most importantly, combining the best of both Timbertek and LFT.

The Helium Rail, built using a combination of Paulownia and Balsa wood creates the same on-rail sensations as the TImbertek Evo, while the Helium deckskin and incredibly light foam core bring this shape to a weight measurement even lower than its LFT cousin.

Among Firewire employees, this is the shape we’re most anticipating in our own quivers as 2017 comes to a close.

Fiber  Reinforced I-Beam down center with Parabolic Rail Springers from nose to tail.

I-BOLIC Technology is an engineering feat that builds performance into the core of your surfboard - no external carbon layups or heavy laminations needed.

A leap forward in surfboard manufacturing with an interplay of our favorite elements of LFT and Helium combined, elevated and enhanced to put The Future Under Your Feet. 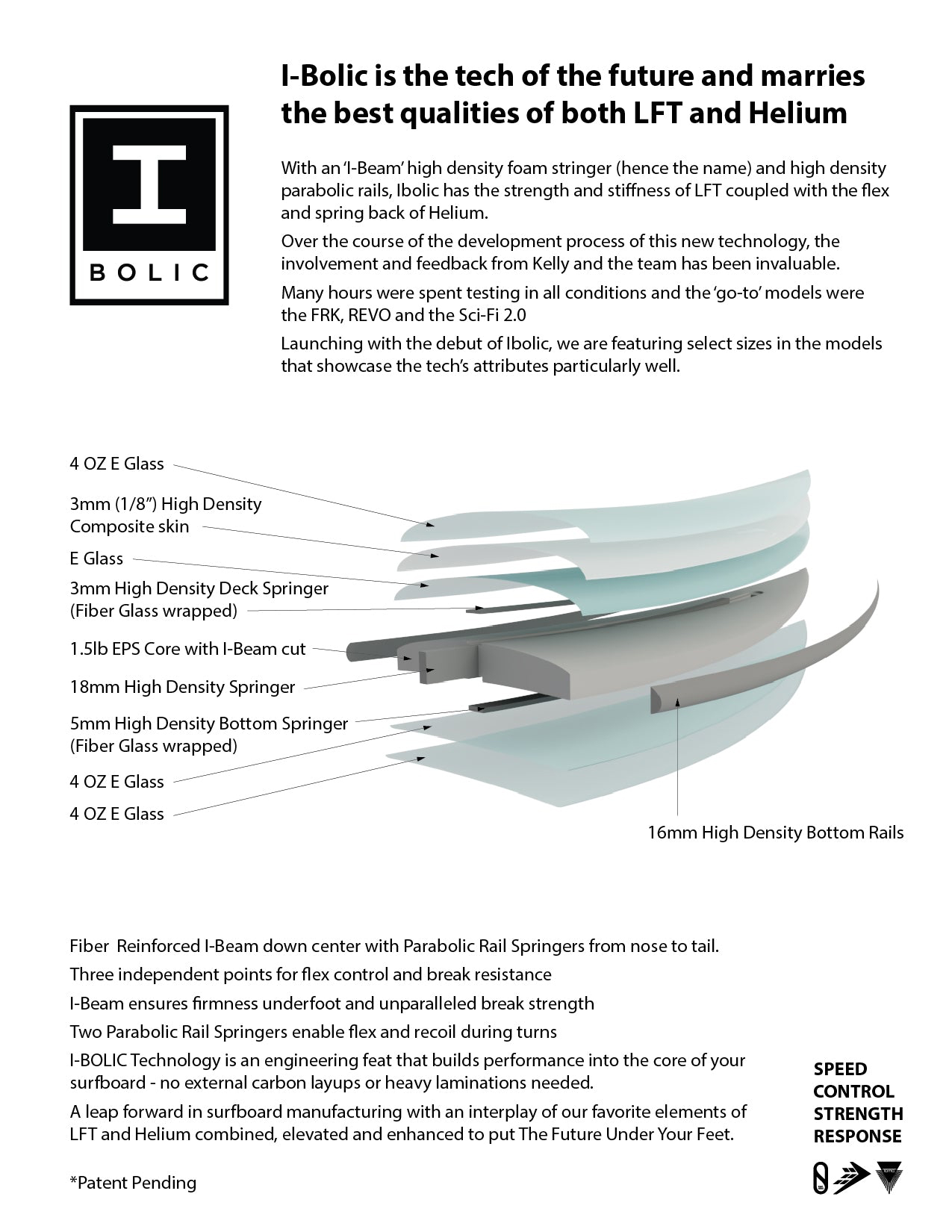 Firewire Surfboards has quite a fascinating history thanks to the man behind the boards, Australian shaper Nev Hyman, and has become one of the most well known surfboard manufacturers of epoxy surfboards. In 1975 Nev started Odyssey Surfboards in Perth, West Australia. After some traveling Nev changed its name to Nev Surfboards in 1981. From here, Hyman began to design blanks for some of the best surfers in the world. Gaining much experience, Nev began to hone his craft and feel for the perfect surfboard. By 1998, Nev Future Shapes was the new name, Hyman’s business was now in the global market, and was producing over 5,000 boards a year with his crew. Starting in 1989, Hyman began to get involved with computer shaping. He became quite involved in the general acceptance of the practice and began to seek his ‘Holy Grail’ of machine-shaped surfboards. Around 2004, Hyman met Bert Berger and was introduced to his high-tech, handmade surfboard that included balsa rails, and a high-density composite top and bottom.

By early 2006, Firewire Surfboards were making their appearance in the lineup. These boards were completely created on a CAD/CAM software allowing for a perfect board to be consistently created without variations in shape. The designing is done by Dan Mann and Nev Hyman on a 2D program called AKU Shaper. A master is cut out on an AKU CNC Shaping Machine and then examined by Hyman and fixed to his standards.

The blank is then transformed into a 3D drawing on CAD modeling software. Here, all parts of the board are created in 3D including rails and stringers. The 3D model is then sent to Firewire’s factory in Thailand, where the final surfboard is created under strict guidelines.

Slater Designs
“I’m not sure if the perfect board really exists, but I’m enjoying the freedom to collaborate with some of surfing’s most innovative shapers and designers. It is a quest to create something different in a slightly different way that appeals to where I want to go on a wave. Discovering a new feeling under my feet, drawing a new line, or taking a completely different track on a wave is something I never stop dreaming about. Now being able share and grow that idea with others is what keeps surfing fun for me.” -Kelly Slater

Firewire
Firewire is dedicated to elevating the surfing experience through innovative design, new materials, and advanced construction methods. In collaboration with surfboard designers like Rob Machado, Dan Mann, and Wingnut, our aim is to maximize stoke in our oceans and minimize waste in our landfills.

Tomo
Push the envelope. Watch it bend. Two sentences describing Tomo’s approach to surfboard design, seen clearly in every shape he’s made since the Vanguard in 2012. Backed up by high level surfing talent and mentoring from some of the surfing’s most legendary surfers and designers, Tomo has developed a ‘sixth sense” for developing some of the most radical and unique performance surfboards ever, for example, the Cymatic for Slater Designs.